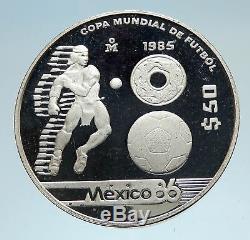 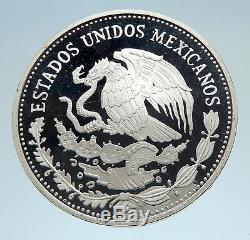 The 1986 FIFA World Cup , the 13th FIFA World Cup, was held in Mexico from 31 May to 29 June 1986. The tournament was the second to feature a 24-team format. With European nations not allowed to host after the previous World Cup in Spain, Colombia had been originally chosen to host the competition by FIFA but, largely due to economic reasons, was not able to do so and officially resigned in 1982.

Mexico was selected as the new host in May 1983. This was the third FIFA World Cup tournament in succession that was hosted by a Spanish-speaking country, after Argentina 1978, and Spain 1982. It was won by Argentina (their second title, after winning in 1978).

Argentina was captained by the 25-year old Diego Maradona, who played a large part in his team's success. Maradona scored the "Hand of God" goal, as well as another voted "Goal of the Century", in the same quarter-final against England. These were two of the five goals that Maradona scored during the tournament, and he also created another five for his teammates. Argentina beat West Germany 3-2 in the final at Mexico City's Estadio Azteca.

Total attendance was 2,394,031, an average per match of 46,039. Canada, Denmark and Iraq made their first appearances at the final stage. The format of the competition changed from 1982. The final pair of matches in each group started at the same time and the second round was played on a knock-out basis rather than groups.

The 24 teams qualified were divided into six groups of four (A to F). The top two teams and the four best third-place finishers from the six groups advanced to the knockout round of 16 teams.

Italy were the defending champions, but were eliminated by France in the Round of 16. The 1986 World Cup saw the appearance of an audience phenomenon dubbed the Mexican wave, which was popularised worldwide after featuring during the tournament. Mexico , officially the United Mexican States , is a federal republic in North America. It is bordered on the north by the United States; on the south and west by the Pacific Ocean; on the southeast by Guatemala, Belize, and the Caribbean Sea; and on the east by the Gulf of Mexico. Covering almost two million square kilometres (over 760,000 sq mi), Mexico is the fifth largest country in the Americas by total area and the 13th largest independent nation in the world. With an estimated population of over 113 million, it is the eleventh most populous and the most populous Spanish-speaking country in the world and the second most populous country in Latin America. Mexico is a federation comprising thirty-one states and a Federal District, its capital and largest city. In pre-Columbian Mexico many cultures matured into advanced civilizations such as the Olmec, the Toltec, the Teotihuacan, the Zapotec, the Maya and the Aztec before first contact with Europeans.

In 1521, the Spanish Empire conquered and colonized the territory from its base in Mexico-Tenochtitlan, which was administered as the Viceroyalty of New Spain. This territory would eventually become Mexico following recognition of the colony's independence in 1821. The post-independence period was characterized by economic instability, the Mexican-American War that led to the territorial cession to the United States, the Pastry War, the Franco-Mexican War, a civil war, two empires and a domestic dictatorship.

The latter led to the Mexican Revolution in 1910, which culminated with the promulgation of the 1917 Constitution and the emergence of the country's current political system. In March 1938, through the Mexican oil expropriation private U.

And Anglo-Dutch oil companies were nationalized to create the state-owned Pemex oil company. Mexico has one of the world's largest economies, it is the tenth largest oil producer in the world, the largest silver producer in the world and is considered both a regional power and middle power. In addition, Mexico was the first Latin American member of the Organisation for Economic Co-operation and Development OECD (since 1994), and considered an upper-middle income country by the World Bank.

Mexico is considered a newly industrialized country and an emerging power. It has the fifteenth largest nominal GDP and the tenth largest GDP by purchasing power parity. The economy is strongly linked to those of its North American Free Trade Agreement (NAFTA) partners, especially the United States.

Mexico ranks sixth in the world and first in the Americas by number of UNESCO World Heritage Sites with 32, and in 2010 was the tenth most visited country in the world with 22.5 million international arrivals per year. According to Goldman Sachs, by 2050 Mexico is expected to become the world's fifth largest economy.

PricewaterhouseCoopers (PwC) estimated in January 2013 that by 2050 Mexico could be the world's seventh largest economy. Mexico has membership in prominent institutions such as the UN, the WTO, the G20 and the Uniting for Consensus. World-renowned expert numismatist, enthusiast, author and dealer in authentic ancient Greek, ancient Roman, ancient Byzantine, world coins & more.

Ilya Zlobin is an independent individual who has a passion for coin collecting, research and understanding the importance of the historical context and significance all coins and objects represent. Send me a message about this and I can update your invoice should you want this method. Getting your order to you, quickly and securely is a top priority and is taken seriously here.

Great care is taken in packaging and mailing every item securely and quickly. What is a certificate of authenticity and what guarantees do you give that the item is authentic?

You will be very happy with what you get with the COA; a professional presentation of the coin, with all of the relevant information and a picture of the coin you saw in the listing. Additionally, the coin is inside it's own protective coin flip (holder), with a 2x2 inch description of the coin matching the individual number on the COA.

Whether your goal is to collect or give the item as a gift, coins presented like this could be more prized and valued higher than items that were not given such care and attention to. When should I leave feedback? Please don't leave any negative feedbacks, as it happens sometimes that people rush to leave feedback before letting sufficient time for their order to arrive. The matter of fact is that any issues can be resolved, as reputation is most important to me. My goal is to provide superior products and quality of service. How and where do I learn more about collecting ancient coins? Visit the Guide on How to Use My Store. For on an overview about using my store, with additional information and links to all other parts of my store which may include educational information on topics you are looking for. The item "1985 Mo MEXICO FIFA World Cup 86 Football Genuine Silver 50 Peso Coin i74960" is in sale since Tuesday, January 22, 2019. This item is in the category "Coins & Paper Money\Coins\ World\North & Central America\Mexico\Mexico (1905-Now)". The seller is "highrating_lowprice" and is located in Rego Park, New York.