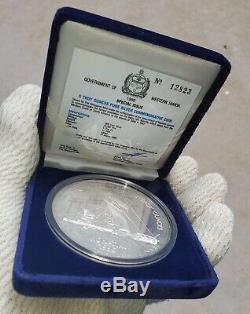 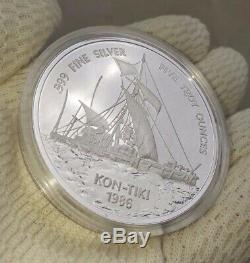 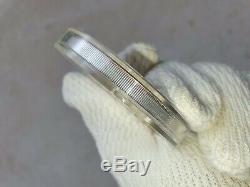 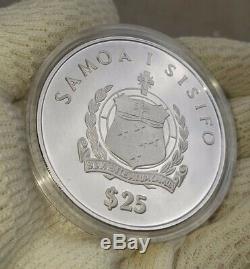 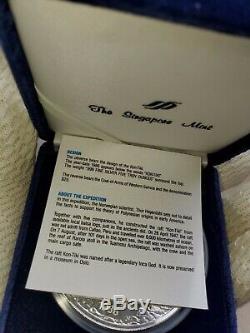 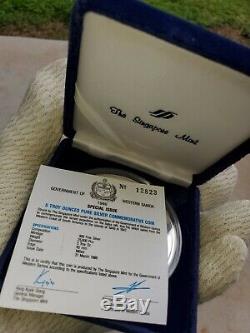 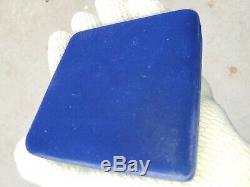 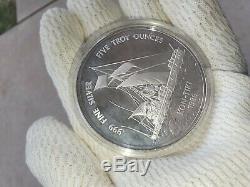 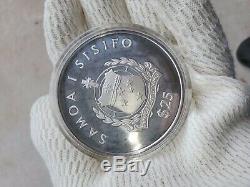 Photographed in daylight inside the capsule. UNC Worlds 1st FIRST 5 Oz Silver Legal Tender Coin Western Samoa UNC 1986. Own a part of coin bullion and world coin history! Tied for Title: "Worlds 1st 5 Ounce Silver Legal Tender Coin, " this is one of the three first 5 ounce coins issued in 1986. 1986 was the first year that any nation minted a 5 ounce silver coin and three did so that year.

Western Samoa is now called Samoa. The original capsule and case are included along with the COA. The Certificate of Authenticity describes the coin as weighing 5 ounces with a triple nines fineness.

Only 25,000 were minted by the Singapore Mint. It will come with its original case and capsule, and the COA.

Background: According to an article that once appeared in a major numismatic magazine, (an article you may be able to find online if you Google the topic) the title of Worlds first five ounce silver legal tender coin belongs to the 1986 coins of three different nations, China, St. Helena and Ascension Island, and Western Samoa (now called Samoa). There were 5 ounce silver medals, fantasy coins and medallic coinage made prior to 1986, and coins weighing almost 5 ounces, but the first true full 5 ounce legal tender coins debuted no earlier than 1986.

Helena and Ascension 25 pounds made by the Royal Mint in the UK has a mintage of 15,000. Of course, there is no way to know how many of these were melted during the last few spikes in silver prices. The Chinese 50 yuan made by the Chinese Mint is rare in pristine condition both because mintage was only 3,000 pieces and because the original packaging has created a lot of PVC contamination among those coins that were stored in that packaging. Since 1986, more than 2 dozen nations have authorized 5 ounce legal tender coins, including the USA, and the popularity of these issues continues to grow.

2 Ask me for your special invoice BEFORE you pay. Allergy Note: All lots come from a smoke free and cat free home but pre-owned items may have originated in different conditions.

Please bear this in mind, as well as the post office transit time estimates, when looking at arrival dates. I have received angry emails from slow paying buyers who have no idea the process is automatic, hence, this reminder. Feedback is important but not my priority.

I leave feedback only once or twice a month in large groups to save time. The item "UNC Worlds 1st FIRST 5 Oz Silver Legal Tender Coin Western Samoa UNC 1986.999" is in sale since Tuesday, March 24, 2020.

This item is in the category "Coins & Paper Money\Coins\ World\Australia & Oceania\South Pacific". The seller is "coin3rdgen" and is located in Oklahoma City, Oklahoma.