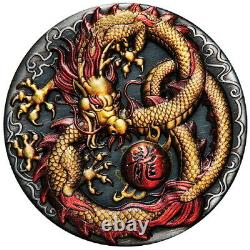 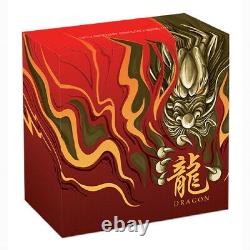 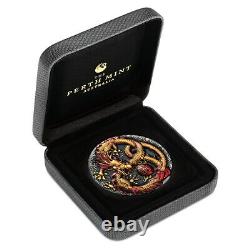 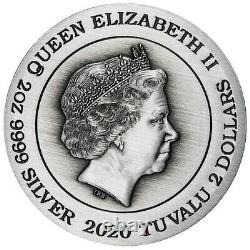 It is often portrayed chasing a flaming pearl, which is a metaphor for wisdom and enlightenment. The glistening gem is traditionally illustrated swirling through cloud and mist, to represent the elusive nature of these qualities. Imperial dragons are typically shown with their eyes wide open and their mouths gaping, as they endeavor to capture the elusive treasure. Its golden color tells us this is a rare imperial dragon. Gold symbolizes royalty and was traditionally reserved for the emperor alone.

Golden dragons also symbolize prosperity and wealth. There are no legends on the obverse, to further enhance the beauty and heighten the drama of the Golden Imperial Dragon vignette. This extraordinarily low mintage coin.

Will undoubtedly sell out, and quickly. This pure silver gem is struck in ultra high, medallic relief on an extra-thick planchet (it is a piedfort) with an antiqued finish. Between the extremely popular Chinese motifs, beautiful design and limited mintage, heed our advicestock up on these stunning, 2 troy ounce, pure silver coins while you can! Because of the desirability of the dragon theme, the.

Rimless ultra high relief format, the beefy two full troy ounces of pure silver, the antique finish, the gorgeous coloration, the hefty 5.86 mm thickness - to say nothing of the. Tiny mintage of just 888. A rapid sell-out at the Mint was expected and occurred in mere hours! Exquisite Design, Color and Finish! The coin depicts an exquisitely detailed golden imperial dragon with its serpentine body twisted in the shape of a figure eight, an auspicious number in the Orient. The legendary creature is surrounded by clouds and is chasing a flaming pearl, which is also rendered in vivid color.

The mystical object is inscribed with the Chinese character for "dragon". There are no legends on the obverse, to further enhance the beauty and heighten the drama of the Golden Imperial Dragon scene as it chases the flaming pearl of wisdom. In keeping with its ancient themes, each coin has been individually antiqued by hand to give it an unique finish conveying the surface abrasions of an aged artefact. As a result of this treatment, the appearance of each coin of the extremely limited mintage may vary. The Perth Mint will release no more than 888 of the Golden Imperial Dragon 2 Troy Ounce Pure Silver Antiqued Coins.

Get yours today, don't miss out and don't delay! The Mythical Dragon and the Flaming Pearl. The dragon is often portrayed chasing a luminous or flaming pearl. In Chinese culture, the dragon is revered as a divine mythical creature, a symbol of power, strength, wealth, and good fortune. The pearl is viewed as a metaphor for wisdom, enlightenment and spiritual essence.

It is also said to rid a person of their troubles, bringing career success as well as good fortune, wealth and good health. From an artistic perspective, dragons are frequently depicted in pursuit of the flaming pearl.

To represent the elusive nature of wisdom and enlightenment, the pearl is typically represented as swirling through mist, smoke, cloud and shadow. The dragons are traditionally shown with their their eyes wide open and their mouths agape, as they endeavor to catch this eternal treasure, the pearl!

The Oriental or Chinese concept of the dragon is much different than the European notion of this beast. Whereas in the West dragons are nearly always evil, fire breathing creatures of immense size and destructiveness, in the East they are beloved. Chinese dragons are benevolent, representing most auspicious powers, particularly control over water, rainfall, and floods. In yin and yang terminology, a dragon is yang (male) and perfectly complements a yin (female).

The dragon is a mystical being, able to use an almost unlimited range of magical or supernatural powers. It is able to disguise itself as a silkworm, or become as large as our entire universe. It can fly among the clouds or hide in water. It can form clouds, turn into water or fire, become invisible or glow in the dark. It is interesting to note that the Oriental dragon's ability to fly is a magical (not a physical) ability; unlike European dragons, Chinese dragons are rarely if ever depicted with physical wings.

Historically, the dragon was the symbol of the Emperor of China. Many pictures of oriental dragons show a flaming pearl under their chin.

The pearl is associated with wealth, good luck, and prosperity. In Chinese culture, the pearl also symbolizes perfection, which is only obtained through the highest forms of wisdom. As such, the pearl is retained in the clutches of the dragon, who, like the emperor, reveals great "pearls of wisdom" as it bestows abundance and prosperity upon its people. Please see the presentation lower on this page for more information about Tuvalu and its association with Australia.

This pure silver coin features the most powerful and auspicious of all the animals in ancient Chinese mythologythe Dragon! With its highly detailed and well-executed design, high relief, vibrant full color, significant precious metal content, auspicious theme and extremely low mintage (only 888), we expect this gem to sell out quickly. Don't delay, get this beauty today! Popular with collectors for more than a century, and always hard to find, piedforts are highly sought after. We get asked all the time, What is a piedfort?

" There are two different, but related, stories of the origin of the word "piedfort. The first says that it literally means "strong foot" in French from. The second says this word was appropriated by the mint centuries ago to mean "heavy measure" or "heavy weight". In both cases, the sense of serious heft to the coin is obvious.

Often the word "piedfort" is translated as "double-thick", but this is neither a literal translation nor a precisely accurate definition. Numismatically speaking, any coin that is 50% or more thicker than a standard version qualifies as a piedfort, although some piedforts are, indeed, twice as thick as normal. Finally, the age-old question, How is the word pronounced? " Coming from French, it is not pronounced as it is spelled; that is, don't say, "pide - fort. Rather, "pee - ay - four" (three syllables) is a good approximation. Please see above for description. There are no legends on the obverse, to further enhance the beauty and heighten the drama of the Golden Imperial Dragon vignette! The reverse features Her Majesty, Queen Elizabeth II, in crowned profile facing right.

This portrait, featuring Her Majesty wearing a tiara and pearl earrings, was executed by the sculptor Ian Rank-Broadley. The legend QUEEN ELIZABETH II, the date and the denomination also appear. The legend 2 OZ 9999 SILVER guarantees the weight and purity.

The coin is housed inside a handsome taupe leatherette, clamshell-style presentation case, lined with black velvet and satin, and protected by a full-color outer box. An individually-numbered certificate of authenticity is included. Antiqued with Ultra High Relief and Color. Ing Ing Jong (obverse) Ian Rank-Broadley (reverse).

The Island Nation of Tuvalu. Its nearest neighbors are Kiribati, Samoa and Fiji.

It is comprised of four reef islands and five true atolls. Its population of 11,992 makes it the third-least populated independent country in the world, with only Vatican City and Nauru having fewer inhabitants. It is also the second-smallest member by population of the United Nations. In terms of physical land size, at just 10 square miles Tuvalu is the fourth smallest country in the world, larger only than the Vatican City, Monaco and Nauru. The first inhabitants of Tuvalu were Polynesian people, who arrived about 3000 years go.

Because Tuvalu has few natural resources it has been dependent in recent years upon aid from larger, more developed nations, including Australia, New Zealand and the United States. The Perth Mint of Australia is officially commissioned by the government of Tuvalu to produce legal tender coinage for the island nation. The item "Tuvalu 2020 Golden Imperial Dragon $2 2 Oz Silver Color High Relief Antiqued" is in sale since Monday, August 3, 2020. This item is in the category "Coins & Paper Money\Coins\ World\Australia & Oceania\Australia\Commemorative".