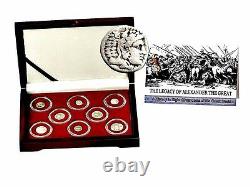 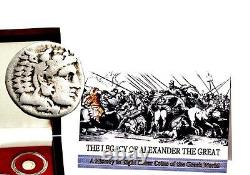 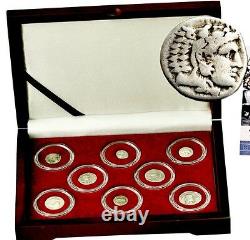 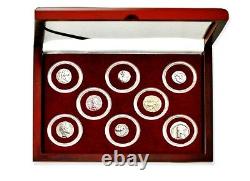 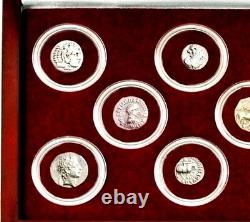 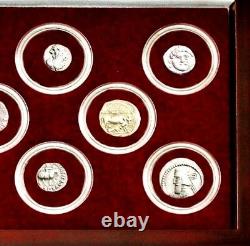 The Legacy of Alexander the Great, A History in 8 Coins of the Greek World, Beautiful Boxed Set. This remarkable collection of eight silver coins features a drachm struck by Alexander the Great, as well as issues from successor kings and subsequent mintages influenced by his iconic design.

Alexander the Great is widely considered the greatest general of all time. At age twenty he emerged from a small kingdom in Macedonia to conquer a vast empire that stretched from the Adriatic Sea in the west to India in the East, and from Egypt in the south as far north as the Black Seaan achievement as astonishing as it was improbable. Legend has it that when he beheld the breadth of his dominions, he wept, for there were no more worlds to conquer. Coinage in the Near East was, in the fourth century BCE, extremely crude. His coinage was struck across his vast empire.

Even after his death in 323 BCE, his general designhead of a Greek god on the obverse, seated deity on the reverse along with inscriptionswas copied and adopted throughout the region, as this collection shows. After his death in Babylon, a hallowed city he hoped to establish as his capital, Alexander-type coins continued to be issued in the two decades following his death by the Macedonian generals who divided the empire between them and created the Hellenistic kingdoms.

Even as the successor kings initialed coinages in their own names and with their own types the "Alexanders" lived on for two centuries during which time they were issued by independent cities as an international coinage. Alexander the Great, Macedonia, drachm, 336-323 BCE The template from which subsequent coinage was based. Alexander was the first to use his own likenessalbeit in the guise of the mythical hero Heracleson coins, a tradition which continues to this day.

Images show typical coins not to scale and are used for illustration purposes only. Coin grades in this set may vary. Cherronesos, Thrace, hemi-drachm, 300s BCE Cherronesos is Greek for peninsula, and several Thracian cities went by this name.

The coins may have been minted at Cardia by the peninsula as a league, or perhaps they were struck by a lost city on the peninsula named Cherronesos. Apollonia Pontika, Thrace, drachm, 300s BCE The temple in this ancient city contained a colossal statue of Apollo by Calamis, which was later taken to Rome and placed in the Capitol. The anchor on the coinage is evidence of the importance of its maritime trade. Menander, Bactria, drachm, 155-130 BCE Originally from Bactria, Menander I Soter (the Savior) ruled the Indo-Greek Kingdom, establishing an empire in the northwest region of South Asia.

He was a patron of Buddhism. Illyria, drachm, 229 -100 BCE Illyria, in the western part of the Balkan Peninsula, was divided into small hereditary kingdoms, none ruling the entire region. When the Illyrian and Macedonian kingdoms threatened their prosperity in the last third of the 3rd century BCE, they turned to the Romans for military support and subsequently assumed the privileged status of a Roman protectorate. Cappadocia, Ariarathes V Eusebes, drachm, 163-130 BCE Ariarathes V Eusebes is considered to have been the greatest of the Kings of Cappadocia. He was distinguished by his excellence of character and his cultivation of philosophy and the arts. Allied with Rome, according to Livy, he was educated there. When his throne was taken, Rome restored it to him. He died in fighting in support of Rome against Aristonicus of Pergamum. Indo-Scythian Kingdom, Azes II, drachm, c.

35 BCE - 5 A. Azes II may have been the last Indo-Scythian king in the northern Indian subcontinent (modern day Pakistan).

IndoScythian rule crumbled under the conquests of the Kushans who expanded into India to create the Kushan Empire. Vologases III, Parthia, drachm, 111-146 CE This kingdom in what is now Iran was held by Vologases III after 105 CE.

He was a prolific issuer of coins, suggesting that his rule was long and secure, and that the local economy was robust. For some of his reign, Vologases was a Roman client king of Armenia. The coin images used are not to scale and are for illustration purpose only.