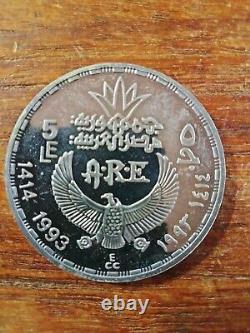 In this coin The Arab Republic of Egypt A. Celebrates its famous queen of the first century B. Her image is engraved in profile with an elaborate headdress that features the ancient c. Nekhbet vulture-symbol of a divine being with great protective powers. The obverse shows the mighty vulture in full wing-span. The daughter of the Macedonian Ptolemy family of Egyptian rulers, Cleopatra married (as was the custom) two of her brothers in succession, then became first the mistress of Julius Caesar and then of Marc Anthony. When Augustus Caesar arrived in force at Alexandria in 31 B. To bring the wayward colony to heel, Cleopatra (and Anthony) committed suicide.

Their tombs have never been found. A remarkable and unusual modern coin that depicts ancient figures, mortal and godlike. Mint-like condition, uncirculated, and brilliant.

In plastic case and felt box. This item is in the category "Coins & Paper Money\Coins: World\Collections, Lots". The seller is "farnscharl" and is located in this country: US.