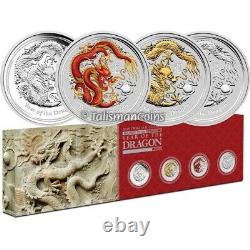 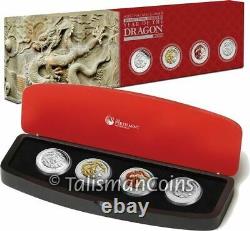 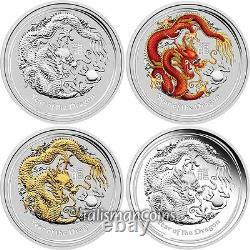 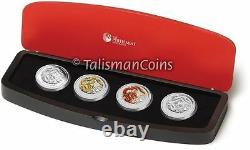 Collect the COMPLETE Year of the Dragon in one fell swoop with this low-mintage, pure silver 4-coin type set! The Perth Mint has done it again! Large, beautiful coins in a one-shot package, all featuring impressive technology and all struck in! These coins are huge - at 45.10 mm in diameter they are nearly 2 inches across! What's more, this set comprises the complete issues in 1 ounce silver, featuring all four different finishes!

Best of all, the mintage is limited to. Only 1,500 complete sets worldwide.

At our low price, this set represents a tremendous value and a great investment! Each coin presents a different style of finish, for a collection of beautiful and bountiful variety. The mirrored design is highlighted on frosted, matte fields (or background). We would refer to this as a "Reverse Proof" or "Reverse Proof-Like" finish.

The fields are deeply mirrored, with the design accented in varying degrees of frosty white cameo relief. The Gilded coin features a reverse proof finish like the Specimen Bullion coin, but the main elements of the design are highlighted in luxurious, 24-karat gold plating. Features a reverse proof frosted background, with the main animal completely rendered in gorgeous full color. The Year of the Dragon - Most Powerful and Auspicious! Centuries ago, the Chinese invented a calendar based on the lunar (rather than the solar) cycle.

While Dragons frequently help others, rarely will they ask for help. Others are attracted to Dragons, especially their colorful personalities, but deep down, Dragons prefer to be alone.

Perhaps that is because theyre most successful when working alone. Their preference to be alone can come across as arrogance or conceitedness, but these qualities aren't applicable.

Dragons have tempers that can flare fast! Theyre driven, unafraid of challenges, and willing to take risks. Theyre passionate in all they do and they do things in grand fashion. The Oriental or Chinese concept of the dragon is much different than the European notion of this beast. Whereas in the West dragons are nearly always evil, fire breathing creatures of immense size and destructiveness, in the East they are beloved.

Chinese dragons are benevolent, representing most auspicious powers, particularly control over water, rainfall, and floods. In yin and yang terminology, a dragon is yang (male) and perfectly complements a yin (female). The dragon is a mystical being, able to use an almost unlimited range of magical or supernatural powers. It is able to disguise itself as a silkworm, or become as large as our entire universe. It can fly among the clouds or hide in water.

It can form clouds, turn into water or fire, become invisible or glow in the dark. It is interesting to note that the Oriental dragon's ability to fly is a magical (not a physical) ability; unlike European dragons, Chinese dragons are rarely if ever depicted with physical wings. Historically, the dragon was the symbol of the Emperor of China.

Many pictures of oriental dragons show a flaming pearl under their chin. The pearl is associated with wealth, good luck, and prosperity. In Chinese culture, the pearl also symbolizes perfection, which is only obtained through the highest forms of wisdom. As such, the pearl is retained in the clutches of the dragon, who, like the emperor, reveals great "pearls of wisdom" as it bestows abundance and prosperity upon its people. This coin features the most powerful and auspicious of all the animals in the Chinese Lunar Zodiac - the Dragon.

The dragon is always the most popular animal, and always sells out. Previous Year of the Dragon coins now sell for many multiples of their issue prices. Don't delay, tame your dragon today! The Perth Mint of Australia employs its own proprietary colorization technology, in which the color is actually sealed on the coin. The vibrant hues and precise execution of the technology create a stunning, full-color portrait on each coin.

The Perth Mint of Australia has developed a proprietary selective gold plating process that is among the most advanced in the world, resulting not only in aesthetic beauty but also technical precision. This proof-like silver dollar features selective gold plating on the obverse, dramatically highlighting the animals in pure gold! A rampaging, imperial Chinese dragon chases after the pearl of wisdom. The legend YEAR OF THE DRAGON defines the theme.

The Chinese character for "Dragon" is to the right, while the Perth Mint's "P" mint mark is judiciously placed to the right, near the 3:00 position along the rim. The reverse features Her Majesty, Queen Elizabeth II, in crowned profile facing right.

This portrait, featuring Her Majesty wearing a tiara and pearl earrings, was executed by the sculptor Ian Rank-Broadley. The legend 1 OZ 999 SILVER guarantees the weight and purity. The legend ELIZABETH II, the date and the denomination also appear.

The coins are encapsulated inside an elegant, oversize luxury presentation case with a solid wood lid (done in the style of red Chinese lacquer), lined with black velvet and protected by a full-color outer box. An individually-numbered certificate of authenticity is included. 4 Dollars (4 x One Dollar). 124.54 g (4 x 31.135 g). 45.10 mm nearly 2 inches!