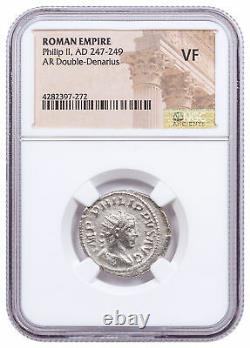 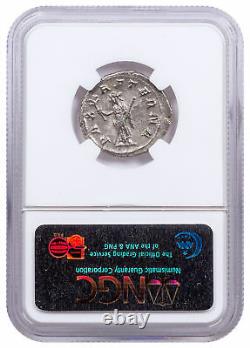 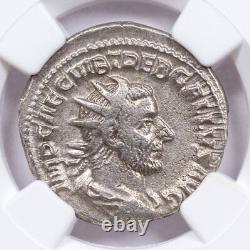 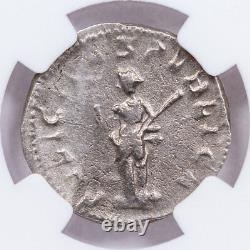 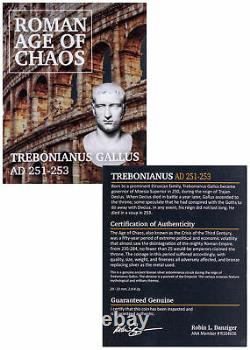 AD 247-249 Roman Empire Silver Double-Denarius of Philip II NGC VF SKU56210. The Roman Imperial Double Denarius was introduced by Emperor Caracalla in early AD 215 as a silver coin. Also known as an antoninianus, the coin's silver content was gradually decreased until it was only a 5% wash over a bronze base by the end of the century. The Emperor's image on the coin, illustrated wearing a radiate style crown, was indicative of the coin's value of two denarii. This Double Denarius was struck in Rome, AD 247-249, during the short reign of Philip II.

The obverse depicts a draped and cuirassed bust of Emperor Philip II, his head adorned with a radiate crown, accompanied by the inscription "IMP PHILIPPVS AVG, " which translates to Emperor Philip, Augustus. Philip II was murdered by the Praetorian Guard in Rome following the death of his father, Philp I, in battle. He was just 12 years old. Pax, the Roman Goddess of Peace, is featured standing on the reverse, grasping an olive branch and scepter. The Latin inscription "PAX AETERN" encircles the image, meaning Eternal Peace. This Silver Double Denarius of Roman Emperor Philip II, struck AD 247-249, has been determined to be in Very Fine (VF) condition by NGC Ancients, the ancient coin grading division of the Numismatic Guaranty Corporation (NGC). The coin will exhibit a strong, sharp strike and good definition of detail with highest points worn flat, similar to a coin earning a grade of 25 on the Sheldon Scale. Add this Double Denarius of Emperor Philip II to your collection of ancient coinage! Specifications for this AD 247-249 Roman Empire Silver Double-Denarius of Philip II NGC VF SKU56210.

We cannot make any price adjustments after the sale is complete. Product Photo Policy: MCM attempts to display product images shown on the site as accurately as possible.

We take all of our photos in house and due to reflections on the mirrored or proof surfaces of a coin there may appear to be'black' when there is not. If a coin has a color on it at all it will be described as'colorized' in the description or title. Due to the large inventory we sell, we use stock photos. Serial numbers will vary from the image shown unless specifically stated in the product listing that the item pictured is the item you will receive.

INTERNATIONAL ORDERS POLICY: We are accepting international orders from select countries. These charges are the customer's responsibility. However, we cannot guarantee this due to the volume of orders we process each day. Beyond the 30-day return period, Company is under no obligation to accept return of any product, but may in its discretion do so pursuant to this policy, for up to one year from the invoice date. ModernCoinMart (MCM) was launched in 2004 and quickly set the standards for online sales of bullion, US coins and world coins. Join over 100,000 loyal customers and feel confident purchasing from a company that's spent a decade building a solid and stellar reputation trusted and recognized around the world. That's the MCM way.

The seller is "mcm" and is located in Sarasota, Florida. This item can be shipped worldwide.