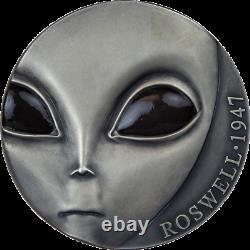 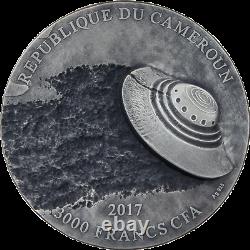 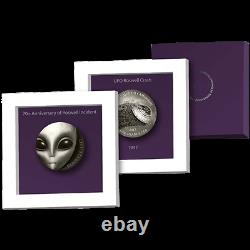 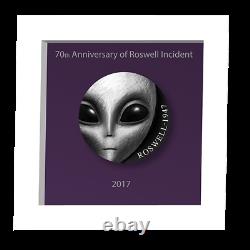 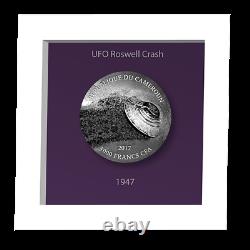 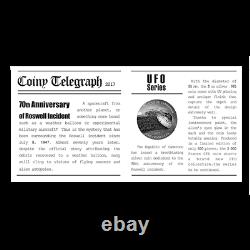 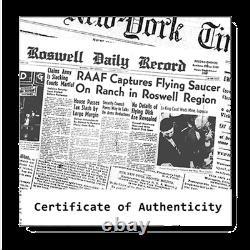 Niue has issued a breathtaking silver coin dedicated to the 70th anniversary of the Roswell incident. The 3 oz alien coin comes with UV painting and antique finish that capture the depth and detail of the design extremely well. Thanks to special luminescent paint, the aliens eyes glow in the dark and the coin looks totally amazing!

Produced in a limited edition of only 500 pieces, the coin starts a brand new UFO collection, the series to be continued. A spacecraft from another planet, or something more banal such as a weather balloon or experimental military aircraft?

This is the mystery that has been surrounding the Roswell incident since July 8, 1947. Almost seventy years later, despite the official story attributing the debris recovered to a weather balloon, many still cling to visions of flying saucers and alien autopsies. Whatever the truth may be, the basic UFO concept is that a saucer shaped aircraft crashed near Roswell and inside were found the bodies of the Alien crew members. The supposed Roswell Aliens were smaller than an average human being with no hair and big eyes. Later, it was reported that the UFO debris found by rancher Mac Brazel in 1947 northwest of Roswell, New Mexico, was in fact a remnant of a balloon flight launched as part of a top-secret program called Project Mogul. Discounts on new coins for registered users. The item "70th Ann of Roswell Incident UFO Antique finish Silver Coin 3 Oz Cameroon 2017" is in sale since Tuesday, January 14, 2020. This item is in the category "Coins & Paper Money\Coins\ World\Africa\Other African Coins". The seller is "topworldcoins" and is located in Rzeszów. This item can be shipped worldwide.