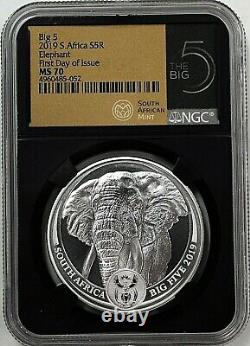 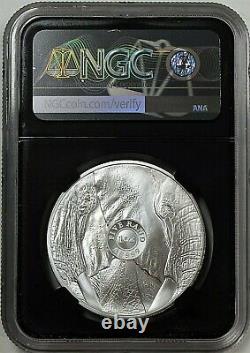 Add our store to your favorite stores and receive our exclusive emails about new items and special promotions. 2019 South Africa S5R 1oz. 999 Silver Big 5 Elephant NGC MS70 First Day of Issue. Some of the worlds most dangerous wild animals live in Africa. Not long ago the highest mark a sportsman could attain was being able to hunt down The Big Five animals on the continent the Elephant, Lion, Black Rhinoceros, Leopard and Cape Buffalo. Each animal was quite capable of killing humans, and they often did even the herbivores! Now you can hunt down these animals without ever leaving the comfort of your easy chair thanks to the South African Mints release of a new series of coins dedicated to these animals. Leading off as the inaugural coin in the series is this magnificent Elephant struck in one Troy ounce of highly-pure 99.9% silver by the prestigious South African Mint the same mint that brings us the iconic gold and silver Krugerrands. Its also the same mint responsible for the immensely popular Natura series that began in the 1990s and featured the same Big 5 animals.

When multiple coins are placed side by side it creates a complete close-up portrait of an elephant. If you dare, put on some thin white gloves and trace your fingers across the rugged design it almost feels like you're caressing the torso of a real elephant! 999 Fine Silver Big Five Silver Elephant has been certified a perfect MS70 First Day of Issue by NGC!

The South African Mint struck just 15,000 of these coins for worldwide distribution and according to the NGC population report ONLY 479 have been certified MS70! In the event the wrong item is delivered Coin Advisor will pay for the return. The item "2019 South Africa S5R 1oz. 999 Silver Big 5 Elephant NGC MS70 First Day of Issue" is in sale since Tuesday, April 20, 2021. This item is in the category "Coins & Paper Money\Coins\ World\Australia & Oceania\Australia\Commemorative".

The seller is "coinadvisor" and is located in Phoenix, Arizona. This item can be shipped to United States, Canada.