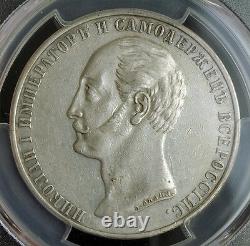 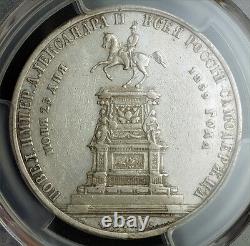 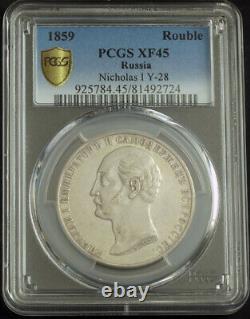 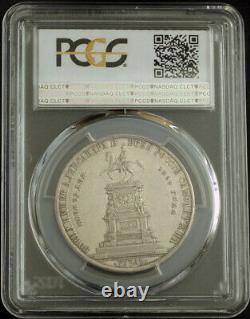 "Nicholas I Memorial" Silver Rouble Coin. Mint Year: 1859 Mint Place: St. Petersburg Denomination: Rouble - Nicholas I Monument Condition. Certified and graded by PCGS as XF-45! Reference: Davenport 209, Bitkin 566, Severin 368, Uzdenikov 4194, Harris 403, KM-28. Diameter: 35mm Material: Silver Weight: 20.7gm. Obverse: Bare bust of Nicholas I of Russia left. Reverse: Side view of the monument to Nicholas I in St. This coin was struck to commemorate the unveiling of the monument to Nicholas I in St. The total mintage number for this beautiful lissue is only 50,000 pcs. A beautiful and important commemorative rouble! Alexander II (Russian: Aleksandr II Nikolaevich) 29 April O. 17 April 1818, Moscow 13 March O. 1 March 1881, Saint Petersburg, also known as Alexander the Liberator (Russian: Aleksandr Osvoboditel') was the Emperor of the Russian Empire from 3 March 1855 until his assassination in 1881. He was also the King of Poland and the Grand Duke of Finland. Born in 1818, he was the eldest son of Nicholas I of Russia and Charlotte of Prussia, daughter of Frederick William III of Prussia and Louise of Mecklenburg-Strelitz.

His early life gave little indication of his ultimate potential; until the time of his accession in 1855, aged 37, few imagined that he would be known to posterity as a leader able to implement the most challenging reforms undertaken in Russia since the reign of Peter the Great. The kings that are listed in this section are among the best that empire had ever seen. In the period of his life as heir apparent the intellectual atmosphere of Saint Petersburg was unfavourable to any kind of change: freedom of thought and all forms of private initiative were being suppressed vigorously. Personal and official censorship was rife; criticism of the authorities was regarded as a serious offence. Some 26 years after he had the opportunity of implementing changes he would, however, be assassinated in public by the Narodnaya Volya (People's Will) terrorist organisation.

His education as a future Tsar was carried out under the supervision of the liberal romantic poet and gifted translator Vasily Zhukovsky, grasping a smattering of a great many subjects, and becoming familiar with the chief modern European languages. His alleged lack of interest in military affairs detected by later historians could have been only his reflection on the results on his own family and on the effect on the whole country of the unsavoury Crimean War. Unusually for the time, the young Alexander was taken on a six-month tour of Russia, visiting 20 provinces in the country.

He also visited many prominent Western European countries. As Tsarevich, Alexander became the first Romanov heir to visit Siberia. Alexander II succeeded to the throne upon the death of his father in 1855. The first year of his reign was devoted to the prosecution of the Crimean War and, after the fall of Sevastopol, to negotiations for peace, led by his trusted counsellor Prince Gorchakov. The country had been exhausted and humiliated by the war.

Bribe-taking, theft and corruption were everywhere. Encouraged by public opinion he began a period of radical reforms, including an attempt to not to depend on a landed aristocracy controlling the poor, a move to developing Russia's natural resources and to thoroughly reform all branches of the administration. After Alexander became Tsar in 1855, he maintained a generally liberal course.

Despite this he was a target for numerous assassination attempts (1866, 1879, 1880). 1 March 1881 members of the Narodnaya Volya (People's Will) party killed him with a bomb. The Tsar had earlier in the day signed the Loris-Melikov constitution which would have created two legislative commissions made up of indirectly elected representatives, had it not been repealed by his reactionary successor Alexander III. The item "1859, Russia, Alexander II.

This item is in the category "Coins & Paper Money\Coins\ World\Europe\Russia\Empire (up to 1917)". The seller is "coinworldtv" and is located in Wien. This item can be shipped worldwide.