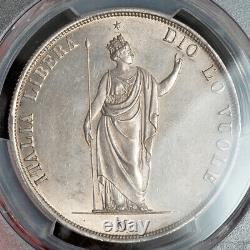 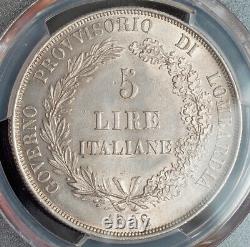 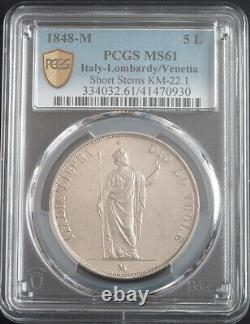 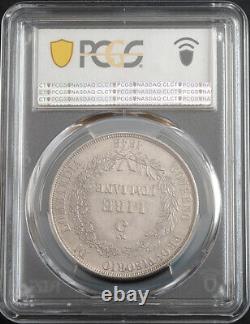 Reference: Davenport 206, KM 22.1. Certified and graded by PCGS as MS-61! Diameter: 37mm Material: Silver Weight: 25gm. Obverse: Togate standing Lombardia (or Tyche) wearing turreted crown, looking right, spear in right hand. Legend: ITALIA LIBERA DI LOMBARDIA 1848 Exergue: M (Milan Mint). Reverse: Denomination ("5 LIRE ITALIANE") within wreath. Legend: GOVERNO PROVISORIO DI LOMBARDIA 1848. The Five Days of Milan was a major event in the First Italian War of Independence, in which the population of Milan, northern Italy, rebelled against the Austrian occupation forces. Almost simultaneous with the popular uprisings of 1848 in the Kingdom of LombardyVenetia, on 18 March that year, the city of Milan also rose. This was the first evidence of how effective popular initiative, guided by those in the Risorgimento, was able to influence Charles Albert of Sardinia. The Austrian garrison at Milan was well-equipped and commanded by an experienced general, Josef Radetzky, who - despite being over 80 years old - was energetic and rigid, the true expression of Austrian military severity. Radetzky had no intention of yielding to the uprising. However, the whole city fought throughout the streets, raising barricades, firing from windows and roofs, and urging the rural population to join them. They formed a provisional government of Milan presided over by the podestà, Gabrio Casati and a council of war under Carlo Cattaneo. Resistance was organised with intelligence and decision.

The Martinitt (orphanage children) worked heroically as message-runners to all parts of the town. Radetzky saw the difficulty of resisting in the city centre, under siege with his force, but - afraid of being attacked by the Piedmontese army and peasants from the countryside - preferred to withdraw. On the evening of 22 March 1848, the Austrians withdrew towards the "Quadrilatero" (the fortified zone made up of the four cities of Verona, Legnago, Mantua and Peschiera del Garda), taking with them several hostages arrested at the start of the uprising. Meanwhile, the rest of Lombard and Venetic territory was free.

In memory of these days, the official newspaper of the temporary government was born, called simply. (the 22nd March), which began publication on 26 March at the Palazzo Marino under the direction of Carlo Tenca. A monument to the uprising by the sculptor Giuseppe Grandi was also built, at what is now Porta Vittoria.

The item "1848, Italy, Lombardy (Provisional Government). PCGS MS-61" is in sale since Sunday, March 28, 2021. This item is in the category "Coins & Paper Money\Coins\ World\Europe\Italy, San Marino, Vatican\Italian States (up to 1861)". The seller is "coinworldtv" and is located in Wien.