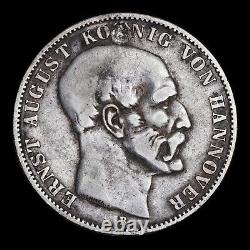 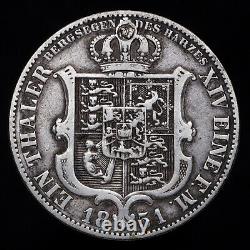 Hanover was chartered as a separate town in 1241. When it grew larger and more powerful as an Electorate, it formed a union with Great Britain and began a dual monarchy in 1714. But when King William IV died without a male heir, Hanover refused to recognize Britain's newly- coronated Queen Victoria. Instead William's brother Ernest Augustine (featured on this coin) assumed the throne as King of Hanover.

The kingdom was annexed by Prussia in 1866. The elaborately decorated shield on the reverse of this coin shows the skill of its engraver. There is a small partial hole at the top of the coin.

This item is in the category "Coins & Paper Money\Coins: World\Collections, Lots". The seller is "farnscharl" and is located in this country: US. This item can be shipped to United States.