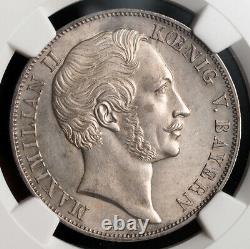 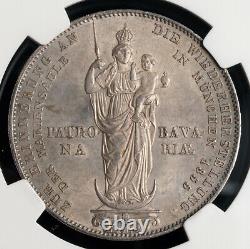 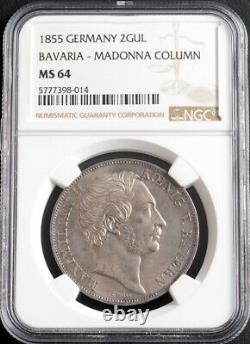 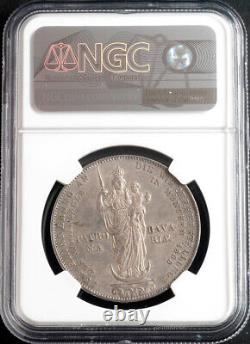 Legend: MAXIMILIAN II KOENIG V. Reverse: Statue of the Marian column, splitting legend (PATRO-NA/ABA-RIAE). Legend: ZUR ERINNERUNG AN DIE WIEDERHERSTELLUNG DER MARIENSÄULE IN MÜNCHEN 1855 Tralsation. In commemoration of the restauration of th Marian column in Munich, 1855. The Mariensäule is a Marian column located on the Marienplatz in Munich, Germany.

It was erected in 1638 to celebrate the end of Swedish occupation during the Thirty Years' War and is topped by a golden statue of the Virgin Mary standing on a crescent moon as the Queen of Heaven, created in 1590. The figure was originally located in the Frauenkirche. Mariensäule in Munich was the first column of this type built north of the Alps and inspired erecting other Marian columns in this part of Europe. Maximilian II of Bavaria (28 November 1811 10 March 1864) was king of Bavaria from 1848 until 1864.

He was son of Ludwig I of Bavaria and Therese of Saxe-Hildburghausen. After studying at Göttingen and Berlin and travelling in Germany, Italy and Greece, he was introduced by his father into the council of state (1836). From the first he showed a studious disposition, declaring on one occasion that had he not been born in a royal cradle his choice would have been to become a professor. As crown prince, in the chateau of Hohenschwangau near Füssen, which he had rebuilt with excellent taste, he gathered about him an intimate society of artists and men of learning and devoted his time to scientific and historical study.

When the abdication of Ludwig I (20 March 1848) called him suddenly to the throne, his choice of ministers promised a liberal regime. Although, however, from 1850 onwards his government tended in the direction of absolutism, he refused to become the tool of the clerical reaction, and even incurred the bitter criticism of the Ultramontanes by inviting a number of celebrated men of learning and science e. Geibel, Liebig and Sybel to Munich, regardless of their religious views. Finally, in 1859, he dismissed the reactionary ministry of Baron Karl Ludwig von der Pfordten, and met the wishes of his people for a moderate constitutional government.

Maximilian II responded also to the demands of the people for a united German state, by attending the Frankfurt Assembly which intended to create such a state. The progress of the revolution, however, gave him pause. In 1849 an uprising in the Bavarian Palatinate was broken down with the support of Prussian forces.

The king strenuously opposed the unionist plans of the Frankfurt Parliament, refused to recognize the imperial constitution devised by it, and assisted Austria in restoring the federal diet and in carrying out the federal execution in Hesse and Holstein. In the aftermath of the failure of the Frankfurt Assembly, Prussia and Austria continued to debate of which monarchy had the inherent right to rule Germany. The dispute between Austria and the Electoral Prince of Hesse-Kassel (or Hesse-Cassel) was used by Austria and its allies (including Bavaria) to promote the isolation of Prussia in German political affairs.

This diplomatic insult almost led to war when Austria, Bavaria and other allies moved troops through Bavaria towards Hesse-Kassel in 1850. However, the Prussian army backed down and accepted the principle of dual leadership. This event was known as the Punctation of Olmütz but also known as the "Humiliation of Olmütz" by Prussia. This event solidified the Bavarian kingdom's alliance with Austria against Prussia. In his German policy Maximilian was guided by the desire to maintain the union of the princes, and hoped to attain this as against the perilous rivalry of Austria and Prussia by the creation of a league of the "middle" and small states - the so-called Trias.

In 1863, however, seeing what he thought to be a better way, he supported the project of reform proposed by Austria at the Furstentag of Frankfurt. Attempts by Prussia to reorganize the loose and un-led German Confederation, were opposed by Bavaria and Austria while taking part in its own discussions with Austria and other allies in 1863 in Frankfurt without Prussia and its allies attending. The failure of this proposal, and the attitude of Austria towards the Confederation and in the Schleswig-Holstein question, disillusioned him; but before he could deal with the new situation created by the outbreak of the war with Denmark he died suddenly at Munich, on 10 March 1864. He is buried in the Theatinerkirche in Munich. The item "1855, Bavaria, Maximilian II.

Silver 2 Gulden Marian Column Coin. NGC MS-64" is in sale since Monday, November 30, 2020. This item is in the category "Coins & Paper Money\Coins\ World\Europe\Germany\German States (up to 1871)". The seller is "coinworldtv" and is located in Wien.