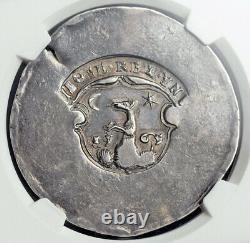 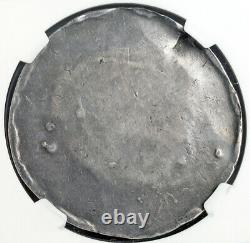 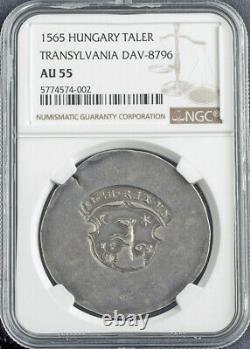 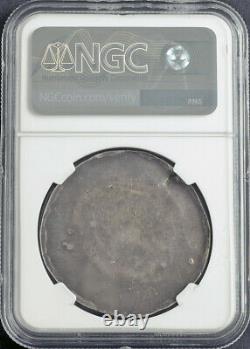 Weight: 28.79gm Diameter: 41mm Material: Silver. Obverse: Coat-of-arms of the House of Zápolya showing a standing wolf in bushes, flanked by moon and a star and (15-65) which split in fields. Banner with titles of John Sigismund Zápolya IO. Reverse: Blank (as usual for this uniface necessity issue).

The Szapolyai or Zápolya family was a noble family in the Kingdom of Hungary in the second half of the 15th century and in the early 16th century. A member of the family, John Szapolyai, was King of Hungary between 1526 and 1540, but he only ruled the central and eastern parts of the kingdom, because many Hungarian lords and prelates supported his opponent, Ferdinand of Habsburg. John Sigismund Zápolya or Szapolyai Hungarian. 7 July 1540 14 March 1571 was King of Hungary as John II from 1540 to 1551 and from 1556 to 1570, and the first Prince of Transylvania, from 1570 to his death.

He was the only son of John I, King of Hungary, and Isabella of Poland. John I ruled parts of the Kingdom of Hungary, with the support of the Ottoman Sultan Suleiman; the remaining areas were ruled by Ferdinand I, who also claimed Hungary. The two kings concluded a peace treaty in 1538 acknowledging Ferdinand's right to reunite Hungary after John I's death, but shortly after John Sigismund's birth, and on his deathbed, John I bequeathed his realm to his son. The late king's staunchest supporters elected the infant John Sigismund king, but he was not crowned with the Holy Crown of Hungary.

Suleiman invaded Hungary under the pretext of protecting John Sigismund against Ferdinand. The capital of Hungary, Buda, fell to the Ottomans without opposition in 1541, but Suleiman allowed the dowager queen, Isabella, to retain the territory east of the river Tisza on John Sigismund's behalf. Isabella and John Sigismund moved to Lippa (now Lipova in Romania). Before long, they took up residence in Gyulafehérvár in Transylvania (now Alba Iulia in Romania). John Sigismund's realm was administered by his father's treasurer, George Martinuzzi, who wanted to reunite Hungary under the rule of Ferdinand.

A wealthy lord, Melchior Balassa, rebelled against John Sigismund in late 1561, which contributed to the loss to Ferdinand of most counties outside Transylvania. The Székely people, whose liberties had been restricted in the 1550s, also rose up against John Sigismund, but he crushed the rebellion. During the ensuing war against the Habsburgs, the Ottomans supported John Sigismund, and he paid homage to Suleiman in Zemun in 1566. The 1568 Treaty of Adrianople concluded the war, confirming John Sigismund in the eastern territories of the medieval Kingdom of Hungary (Transylvania and "Partium"). John Sigismund initiated a series of theological debates among the representatives of the concurring theological schools of the Reformation in the 1560s. He converted from Catholicism to Lutheranism in 1562 and from Lutheranism to Calvinism in 1564.

Around five years later, accepting the Anti-Trinitarian views of his physician, Giorgio Biandrata and court preacher Ferenc Dávid, he became the only Unitarian monarch in history. In 1568, the Diet passed the Edict of Torda (now Turda in Romania), which emphasized that "faith is a gift of God" and prohibited the persecution of people for religious reasons. The edict expanded the limits of freedom of religion beyond the standards of late 16th-century Europe. John Sigismund abandoned the title "elected king of Hungary" in the Treaty of Speyer in 1570. Thereafter, he styled himself "Prince of Transylvania and Lord of Parts of the Kingdom of Hungary".

NGC AU-55" is in sale since Monday, May 11, 2020. This item is in the category "Coins & Paper Money\Coins\ World\Europe\Romania". The seller is "coinworldtv" and is located in Wien. This item can be shipped worldwide.