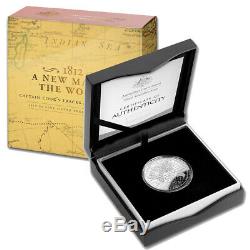 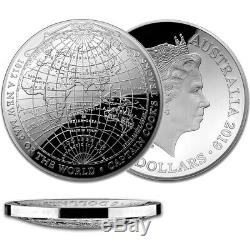 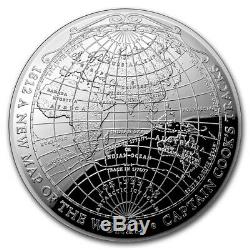 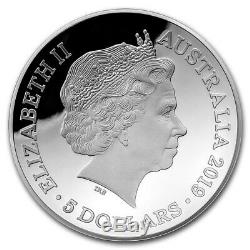 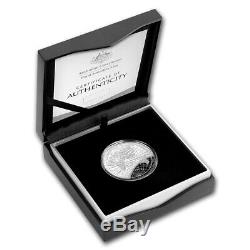 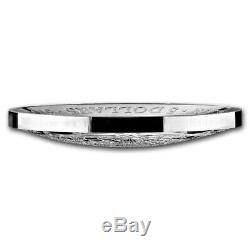 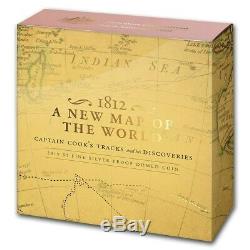 THANK YOU FOR VISITING NEXUS PRECIOUS METALS. Explore Captain James Cook's famous voyages with this exquisite 2019 Australian 1 oz Proof Silver Domed coin. The 18th century travels of Captain Cook unveiled mysteries of the world for scientists, cartographers and explorers. The excitement of this era of discovery is commemorated in beautiful detail on this Silver domed coin, based on historic and rare maps of the period.

Limited mintage of 5,000 coins worldwide. This is the first Silver coin in the Terrestrial Domed Series by the Royal Australian Mint. Each coin comes in a case with an outer box and a numbered certificate of authenticity. Obverse: The Ian Rank-Broadley likeness of Her Majesty Queen Elizabeth II along with the year and face value. Reverse: Features depictions of the Eastern Hemisphere based on a historic and rare map showing Captain James.

Cook's tracks and his discoveries. The inscription "1812 A New Map of the World Captain Cook's Tracks" surrounds the map. Sovereign coin backed by the Australian government. This first coin in the two-coin Terrestrial Dome Silver coin series features the Eastern Hemisphere. This limited mintage Silver domed coin with its unparalleled, intricate detailing is uniquely suited for history buffs. Gift-givers and investment enthusiasts alike. The earliest known maps date back to the 6th and 5th century B. Assuming the flat Earth conception.

World maps assuming a spherical Earth later appeared during the Hellenistic period. During the Age of Exploration. Maps became increasingly accurate as explorers began to explore and discover new lands. And continue to be necessary tools to navigate the world and stir imagination for further exploration.

Captain James Cook, a British explorer, embarked on his first voyage in 1768. He first sailed westward to Brazil and. Rounded Cape Horn, then sailed to New Zealand in 1769.

In April 1770 they were the first Europeans to reach the eastern. Coast of Australia, making landfall at a place now known as Botany Bay. Captain Cook and his crew sailed on along. The Australian coastline, charting on to the port of Batavia in the Dutch East Indies, and rounding the Cape of Good Hope on March 13, 1771.

Captain Cook's second voyage departed Plymouth in 1772 to the Cape of Good Hope. They headed for the South Atlantic and. Eventually sailed south through ice to reach the Antarctic Circle on January 17, 1773.

Captain James Cook's third and final. Voyage left Plymouth in July 1776, and reached Cape Town in October. They sailed on, and named the Prince Edward Islands in. December, and reached Van Diemen's Land (now known as Tasmania) on January 16, 1777. Continuing onward, he became the first.

European to reach the Hawaiian Islands in January 1778, which he named the "Sandwich Islands". They then headed to the western. Coast of North America, where they made landfall on the Oregon coast, and later headed to Vancouver Island.

Metal Content:1 troy oz. We take Your satisfaction very seriously. If you are not satisfied with the coin you can return it within 14 days without any questions to be asked. Coins should remain in their original holders. Please pay within 7 days.

The item "2019 AUSTRALIA 1 OZ SILVER $5 MAP OF THE WORLD PROOF COIN CAPTAIN COOKS TRACKS" is in sale since Friday, October 25, 2019. This item is in the category "Coins & Paper Money\Bullion\Silver\Coins". The seller is "nexuspreciousmetals" and is located in Farmingville, New York.